On the CNN news portal appeared an interview with the multiple Olympic swimming champion Michael Phelps. The athlete admitted that he was suffering from depression.

“You know, a couple of weeks ago I struggled with a very strong depression. And now I clearly understand, this is that thing that will always be in my life. Now I’m trying to find out how to understand myself better, to find the root of this problem “- said the swimmer.

According to Phelps it became easier for him after seeking help from specialists.

“I want to save my life, I want to change everything. This is the most important thing right now, much more important than all these medals and trophies. ”

Michael Phelps ended his career after the Olympic Games 2016. Now the swimmer is actively involved in various social projects that raise awareness of the population about depression and other mental illnesses.

The American is the first and only in the history 26-time world champion and 23-time Olympic champion. Swimmer is also an absolute record holder in the number of Olympic awards (28) and a holder of several world records. 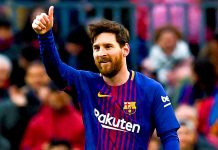 Vinicius repeated test for coronavirus and cannot enter while waiting for...

Vinicius repeated test for coronavirus and cannot enter while waiting for...